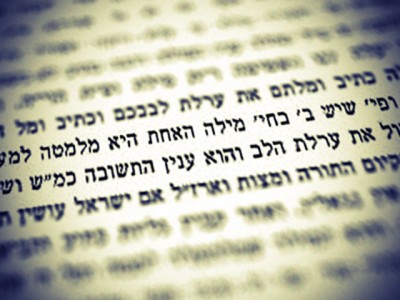 This Ma’amar is customarily recited at a Bris Milah

”In that selfsame day, Avraham was circumcised.” 1 Many Torah commentaries pose the question: Why didn’t Avraham circumcise himself beforehand? [The Talmud 2 declares, that Avraham] fulfilled the entire Torah before it was given, including even [Rabbinical decrees such as] Eruv Tavshilin. [If so, why didn’t he circumcise himself as well?]

To understand this concept, we must first understand [the nature of] circumcision. [Circumcision is alluded to in the verse,3] ”It is not in heaven that you should say: ”Who shall go up for us to heaven?” [The first letters of this phrase] serve as an acronym [for the Hebrew word] Milah [meaning circumcision]. The final letters of those words are an acronym for the [Name of G-d] Havayah.

[What is the connection between circumcision and the name Havayah? Besides the physical deed, circumcision reflects a spiritual service. We find two references to this concept in the Torah.] One verse4 declares, ‘‘you shall circumcise the foreskin of your heart.” The second declares,5 ”The L-rd, your G-d, will circumcise your heart,” i.e. there are two aspects of circumcision: one [performed by man in his striving to elevate himself] from below to above. [This service] necessitates the circumcision of the heart, i.e., the service of teshuvah, as it is written,6 ”You shall return to the L-rd, your G-d.” [This return is expressed] through the fulfillment of Torah and its mitzvos, and [will lead to the future redemption,] as our Sages declared,7 ”If the Jewish people turn [to G-d] in teshuvah they will be redeemed and if not, they won’t be redeemed.”

In regard to the era which follows [the redemption and] the return of the dispersed remnants [of our people], the Torah declares,8 ”(G-d) will bring you to the land…and He will do you good….” This represents [the second level of] circumcision, [involving the descent of G-dliness] from above to below, the level described in the verse, ”And G-d will circumcise your heart.” (Therefore, the verse says, ”He [G-d] will do you good even more than for your fathers,” i.e., He will reveal ”the great good that You hid….”9 [The connection between circumcision and good can be seen in the case of] Moshe, who was born circumcised.10[Concerning his birth, the Torah comments11] ”And she saw that he was good.”

This, the second level of circumcision which will be revealed after the fulfillment of the entire Torah and the return of the exiles, is the level of circumcision referred to in the verse, ”Who shall go up for us to heaven?” the acronym for circumcision. From this verse, we see that circumcision is above Torah. Torah is ”not in the heavens” for it has descended below. Therefore, the Talmud states,12 ”Rav Yehoshua declared, We shall pay no attention to a heavenly voice.” [Why?] because Torah is not in the Heavens, but below.

Therefore, the Torah is called the Torah of Havayah (Yud-Hay-Vov-Hay) [for that Name of G-d also implies a process of descent]. Yud – standing for contraction, Hay – for expansion, Vov – for drawing down, etc. Through [this name] G-dliness is drawn down below.

Therefore, our sages declared,13 ”Great is the mitzvah of circumcision, behold thirteen different covenants were established over it.” [When they declared] ”great,” they referred to the greater aspect of circumcision, the revelation from above to below in which ”G-d will circumcise your heart.”14

This principle is brought out in the verse, ”Until Your people pass over, O G-d.”15 [The Name of G-d used in the verse is Havayah. The verse can be interpreted -] ”Until Your people pass over [and reach a higher level] than Havayah.” ([The connection of the world] ”pass over” to this level [is emphasized by the fact that] in connection with the Thirteen Attributes the Torah states,16[”and G-d] passed over.”)

To highlight this, the Torah states, ”Avraham was circumcised,” [using the passive voice] and it does not say he circumcised himself. In the case of Yishmael and the slaves, the active voice is used, for they merited only the lower level of circumcision [the level that can be achieved by man’s actions in] ”circumcising the foreskin of your heart.” However, concerning Avraham, the passive is used because there [the higher level, the aspect beyond our powers] the level of ”and G-d will circumcise your heart” was revealed.

14 See also the gloss of Mikdash Melech to the Zohar, Vol. III, p. 233b; and Likkutei Torah, [of the AriZal] Parshas Kedoshim, Taamei HaMitzvos, regarding the sublime levels associated with the mitzvah of circumcision