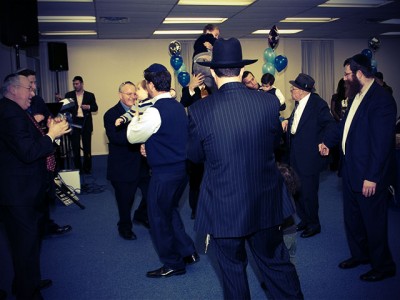 At the time when the Roman armies conquered and ruled the land of Israel they set forth three new decrees. Their intentions were specifically to target and destroy the Jewish identity. The decrees were; no one can keep Shabbat (Saturday) sacred, no one was allowed to circumcise their sons or keep the laws of family purity. They realized that if these decrees would be successfully enforced this would destroy the Jewish people as a nation and assure assimilation.

The sage Rabbi Reuven, deeply concerned with the situation decided to take action. He had his hair cut in the same style as the Roman officials (which normally is forbidden), he then took a seat among officials participating in their discussions.

When these new decrees came up for discussion, he inquired, “Why should we make the Jews work an extra day (Saturday)? Another day of work creates commerce and brings wealth and strength to them.” So accepting the logic of his argument they nullified the decree. Continuing to play on their prejudice and misconception he added rhetorically, “Doesn’t circumcision weaken the body? Why should we strengthen our enemy?” This decree was likewise nullified.

He then used a similar argument “why are we seeking to multiply their numbers by forcing cohabitation even during the menstrual period”. They nullified the third decree as well.

The news spread quickly and caused much relief and joy to the Jewish people. However, unfortunately this joy was short-lived for the Roman officials realized that this new official that no one really recognized, only engaged in discussions concerning the Jewish people encouraging arguments to nullify their decrees. They came to the conclusion that he must have been an imposter, a Jew that had the gall to disguise himself and fool them. Immediately they re-instated the decrees with no more discussions to be held on this matter.

The sages of Israel had no other choice but to petition the emperor. However, now that the Roman officers were enraged at their audacity this ment that the petitioners would be in danger of being penalized and harmed, even before having the opportunity of reaching the emperor and presenting their partition. They therefore chose to send as their messenger the great sage Rabbi Shimon Bar Yochai, for he was sustained by miracles for the 13 years that he fled the officials and was hiding in a cave. Perhaps in his merit another miracle would occur and the Jewish people would be spared. The custom was to send two petitioners so they sent Rabbi Eliezer bar Yosef to accompany him.

As they where coming in to Rome, an evil spirit greeted Rabbi Shimon Bar Yochai and inquired by him, “Should I join you?” Rabbi Shimon was pained saying, “why should the salvation of the Jews people come from this spirit and not from an angel”, on the other hand, he rejoiced saying, “Wherever the salvation will come form it is welcomed.” He then instructed the spirit to go ahead of them. The spirit entered the emperor’s daughter’s body and she became demented. The only clear words that she said was “bring the sage Rabbi Shimon Bar Yochai.” – that he pray on my behalf.

When he arrived at the palace he was immediately taken to the princess’s room. He then instructed the spirit to leave her unharmed. In appreciation of having his daughter saved, the emperor offered to bring Rabbi Shimon into the private treasury room and grant him his any wish. Rabbi Shimon looked around until he saw the document baring these decrees; he took the document and ripped it up thereby nullifying the decrees.

We see to what great extent our sages went in order to preserve the commandment of Bris milah.