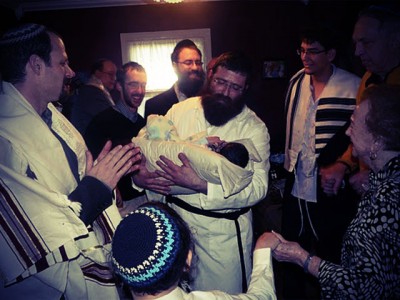 “And God revealed Himself to Avraham.” (Vayeira 18:1 ) Rashi a noted commentary on the Torah states: ” God came to visit the sick. He then quotes Rabbi Chama bar Chaninah as saying “It was the third day after his circumcision and the Holy One, blessed be He, came and enquired about his well-being.”

We must understand why did the circumcision cause Avraham to fall sick? Avraham felt such great joy and happiness at the opportunity and merit to fulfill God’s commandment of circumcision, now that great joy should have prevented him from feeling any pain.

We see a parallel to this in Halachah-Jewish law: Shabbat is a holy day and is intended to be a day of pleasure and feast; it is therefore prohibited to fast on Shabbat. However when a person has a disturbing dream, then he is allowed to fast on Shabbat because his fasting will give him more satisfaction than eating. Although fasting is generally connected with discomfort, nonetheless for this person his emotional state is such that fasting and the discomfort associated with it is what will bring him pleasure. Similarly, the happiness that Avraham felt at fulfilling God’s commandment should have transformed his discomfort into pleasure.

It may be explained that since God desired that the covenant  of circumcision permeate through the totality of our beings to the extent that it effects our actual flesh, it was necessary that Avraham let himself experience the feelings that the circumcision naturally causes.

Nevertheless, the question still arises: The fulfillment of God’s commandments is intended to develop perfection in every aspect of a person’s soul. That spiritual perfection should, in turn, be reflected in every aspect of one’s body. Particularly, in regards to the commandment of circumcision, As God told Avraham, “Proceed before Me and become perfect.” If so, why should a mitzvah which is intended to bring out perfection within a person cause him to become sick, so sick that on the third day, the sickness became stronger, and God Himself had to “visit the sick?”

To understand this, it is necessary to explain the concept of God’s visiting the sick: In Or HaTorah, the Tzemach Tzedek explains that the source of sickness is the soul’s being lovesick out of a desire to cling to God. [The Hebrew word for sick הלוח is numerically equivalent to 49. There are “50 gates of understanding in the world.” Thus, when a person has acquired only 49, he becomes sick, yearning for the completion he lacks.] The remedy for this sickness is the revelation of Godliness. This is intimated in the Ramban’s commentary on this Torah portion, which he explains that God’s revelation to Avraham healed him from the circumcision.

The mitzvah of circumcision came after Avraham’s service of leaving “his land,” “his native country,” and “his father’s home,” i.e., after he completed the service of departing from his previous state (even when that state is itself a level of holiness), in order to proceed to “the land which I (G-d) will show you,” i.e., to become one with God’s will. The mitzvah of circumcision demonstrates how this union with God is reflected in “a covenant in your flesh.” This brought Avraham to the level of perfection.

This perfection, however, reflects only the perfection that can be accomplished by a creation, what a creation can achieve with its own efforts, this relates to the 49th gate of understanding.

On this basis, we can understand why the perfection Avraham achieved through the circumcision brought sickness. It was the reaching of the 49th level, the highest level that could be achieved through man’s own efforts, which led Avraham to the intense yearning for the fiftieth level. This yearning was so intense that he became “lovesick,” which, in turn, was reflected in sickness on a simple level. He was healed from this sickness by the revelation of Godliness, i.e., the revelation of the fiftieth level.

The fiftieth level is a simple point totally above all dimensions and yet including within it all the length, breadth, and depth that is found within all the creations in the spiritual cosmos. This point represents, in the Rambam’s words, “the truth of His being,” from which “came into to being all the entities which exist.”

In the personal world associated with our service, this concept can be explained as follows: Although a person must prepare himself to receive the fiftieth level through self nullification, the “lovesickness” described above, the revelation of the fiftieth level does not nullify a person’s individual existence. Rather, it permeates through the totality of his being. Since, “Israel and the Holy One, blessed be He, are one,” God’s essence is reflected within the Jew.