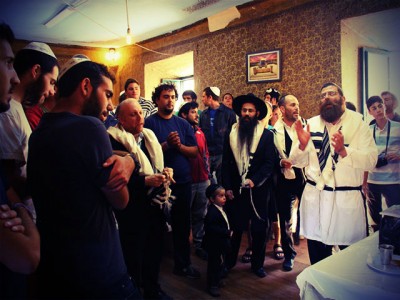 The Three Components of Circumcision:
the Act, the Result and the Negation of the Foreskin — And How They’re Meaningful

Mitzvot are not just commandments from G-d: They are acts, beliefs and values designated by G-d to give mortals the opportunity and ability to spiritually elevate themselves—to connect with G-d. However, there is one mitzvah that stands out as essential and symbolic of all mitzvot, in the context of mitzvot offering a link between the human being and G-d Himself: The mitzvah of bris. Commonly and popularly translated as “circumcision”, bris, which actually means “pact” or “covenant”, is a symbol of G-d physically embedded in the human flesh.

Let’s explore just what this mitzvah is really all about and how is it so reflective of all the mitzvot.

The Spiritual Purpose of Mitzvot
To help us understand mitzvot, let’s look at Maimonides’ Guide for the Perplexed. In this ancient scholar’s work (much of which is based on the Zohar and other works of Kabbalah), it is explained that one of the reasons for ritual circumcision is to weaken the lust associated with that particular limb.

This “weakening”, or processing the human being’s natural drives that is at the philosophical core of circumcision, is also one of the universal concepts behind all mitzvot: the upgrading the base human being to the level where his lusts and pleasures are spiritual in nature. For the purpose of mitzvot is to live a life that consists of more than hunt and gather, and circumcision is symbolic of this purpose.

In addition to circumcision’s general connection to all mitzvot, its particulars are connected to the universal concepts of mitzvot as well. How so?

Veer from Evil and Do Good

In Psalms 34:15, King David states: “Veer from evil and do good…” But isn’t veering from evil automatically good? Not necessarily! King David is making a critical point here: just avoiding the wrong, while a good thing, is a negative—it’s a non-action good thing accomplished by simply doing nothing. All you have to do is sit there and not steal, or not lie, and you’ve “veered” from evil.

But what about doing good things with actions? That’s the second part of the quote: “do good…” Avoiding the wrong things isn’t enough. You’ve got to stand up and take action. You’ve got to do. And this is what these circumcision particulars spiritually represent.

Being spiritually “of circumcised status” means to “do good”. To act. To take down those inner barriers so that your Jewish soul can physically express itself in thinking, speaking and doing Torah study and mitzvah performance in daily life, whether with yourself or with others.

Being spiritually “of non-foreskinned status” means to “veer from evil”. How do you spiritually “veer” from evil? By being “non-foreskinned”: by not acting evilly, wrongly or immorally. By not being under the influence of the base human drive referred to by the Talmud (Tractate Sukkah 52a) as “the foreskinned one”—and to ultimately have no evil and no lusts in one’s conscience, whether gross lusts or fine lusts.

The spiritual symbolism continues. Just like with the defining criteria of physical circumcision, which dictate that if an infant is born circumcised he must undergo the act of hatafas dam bris, so too with spiritual “circumcision”:

Some people are just born spiritually “circumcised”. They’re born with the natural character to “do good”. The natural-born do-gooder is the person who is naturally scrupulous and naturally moralistic. He is “born circumcised”.

Other people are born spiritually “of non-foreskinned status”. They’re born with the natural character to “veer from evil”. These “evil-veer-ers” are the naturally frigid, impassionate types who don’t really get passionately into anything, and thus are automatically vigilant against blatant evil.