Home » Ceremony » Honorees at a Bris

Honorees at a Bris 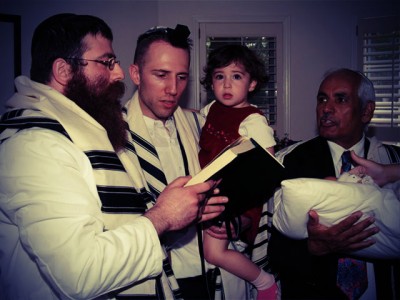 The honorees their functions and significances

Carries baby from mother to bris room and, after the bris, back to mother. This is the one formal honor bestowed upon a woman at a bris. Often, the Kvatterin and Kvatterare a couple seeking to have a child,  as this honor is deemed propitious for this purpose.

In some communities baby is passed from woman to woman, each bringing him closer to the bris room.

Carries baby from Kvatterin to bris area and, after the bris, back to the Kvatterin.

In some communities the baby is passed from man to man, each bringing the baby closer to the bris area.

Places baby on the chair designated as Throne of Elijah.

Some place great emphasis on this honor.

Takes baby from the Throne of Elijah and gives him to father who places him onsandak’s lap.

Many single out the Rabbi or the Grandfather for this honor.

Takes the baby from sandak at conclusion of the circumcision and gives him to the standing sandak.

Holds baby while blessings and prayer are recited, during which baby is given his Hebrew name.

Arizal considered this an important honor.

Reader of the blessings

This honor is often bestowed on a Rabbi, Mohel or Sandak.

Recites Prayer during which baby is given his Hebrew name.

Recites the invitation to the Grace after meal – following the festive meal; RecitesHarachamon prayers.

In some communities the Mohel is accorded this honor. In others, a different person recites each Harachamon prayer.