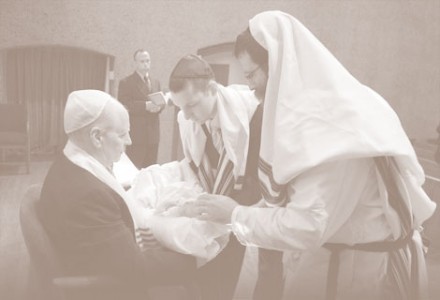 The customs and laws pertaining to circumcision are derived from the Bible, Talmud, and Jewish tradition, all of which have been meticulously passed down from generation to generation.

Circumcision is the first commandment given by God to Abraham, the first Jew, and is central to Judaism. Abraham, the father of the Jewish People, had for many years served God righteously. Yet it was only after he circumcised himself by God’s command at the age of ninety-nine years, that he was able to reach the ultimate level of Biblical perfection of “and you shall be perfect” (Genesis 17:1).

God desired that this final “finishing touch” and perfection of our body should be a distinctly human act. This teaches us that spiritual perfection must and can be accomplished by human effort.

It is written in the Torah: “This is My covenant that you shall observe between Me and you and your children after you, to circumcise your every male. You shall circumcise the flesh of your foreskin, and it shall become the sign of a covenant between Me and you” (ibid. 17:10-11). This is the only commandment of the Torah called “the sign of a covenant” between God and the Jewish people. In fact, the Torah mentions the word “Bris” (Heb. covenant) 13 times in connection with circumcision, which is why the word “Bris” has become synonymous with circumcision. Our Sages say that it is considered the greatest of all the commandments.

The covenant between God and the Jewish people is so profound and significant that the circumcision is performed at the earliest possible time in a person’s life. The Torah tells us that this is on the eighth day after birth.

As children mature and develop they are trained to observe all the mitzvot, each according to their level, especially once they reach the age when they are able to perform them on their own and appreciate their importance. With circumcision, however, we do not wait until the boy develops enough to comprehend its significance. This is because the bond and covenant between the Jew and God transcends intellect and is so vital that it is not delayed.

Another distinction is that other commandments are performed in conjunction with, but external to, the body. Tefillin (phylacteries), for instance, are worn on the arm and head; charity is given by the hand. Circumcision is unique for it is performed upon the body itself, leaving the mark of God’s eternal covenant upon it for life.

Once a boy is circumcised, his Godly soul begins to enter his body in a process that is completed at his Bar Mitzvah at the age of thirteen.

The Sages of the Talmud taught that “every commandment of the Torah for which the Jewish people have sacrificed their lives, especially under the threat of death during periods of governmental persecution, including circumcision, is preserved by them.” Indeed, throughout the generations, even under the worst persecutions, the Jews have kept the mitzvah of Bris Milah with incredible devotion, self-sacrifice and joy. Our Sages have also said: “Every commandment that the Jews have accepted upon themselves with joy, such as circumcision, endures.”

The person who performs the Bris is called a “Mohel.” He is a master surgeon with special expertise in Jewish ritual circumcision. To qualify as a Mohel one must be a God-fearing, Torah observant Jew, and trained in all of the myriad Jewish laws and medical laws pertaining to Bris Milah.

By having the Bris performed by a qualified Mohel one is assured that the entire procedure is acceptable to Biblical and Halachic (Jewish law) standards, and performed in a most medically competent manner.

One should note that having a baby circumcised by a pediatrician surgeon at the hospital does not fulfill the Biblical requirements of a Jewish ritual circumcision. The obligation still remains to be circumcised ritually. In addition, many physicians utilize various methods and procedures, such as the Gomco clamp that causes unnecessary pain to the child, and is forbidden according to Jewish law.