STORY: A Bris in Communist Russia 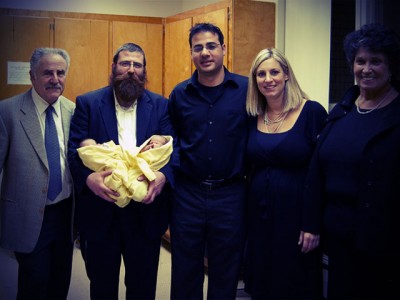 Communist Russia was, along with Nazi Germany, the worst possible place on the globe for Judaism. After the revolution of 1917 the ‘Party’ began closing Synagogues and forbidding the learning of Torah and in the early 20’s only the old Jews and the Chassidim dared look ‘Jewish’ in public. Only card carrying Communists could get normal jobs (which could mean starvation) and anyone caught doing a Jewish ritual even in private would lose any position of importance.

In such an environment occurred, in the city of Gomel in 1924, a sensational trial with a Jewish theme; a high-ranking Communist official who happened to be Jewish, discovered that his wife, without his knowledge, had their baby son circumcised eight days after he was born and was suing for divorce.

The Communists made sure it was well-publicized; they wanted everyone to see how outdated religion was and courthouse was overflowing; even the standing-room bleachers and public galleries were full to capacity.

The judge, who happened to be Jewish, sat austerely in a large chair behind a thick table and before him stood several burly young Yevsektsia (Jewish movement sworn to destroy Judaism) ‘security’ ready to keep order.

The first to take the stand and testify was the husband.

“I came home to find my child crying. When I went to change his diaper I saw that he was bandaged up. ‘Circumcised’ she says! Just like that. I was surprised, disgusted and angry at once. Then she insisted that she had nothing to do with it which, even if it’s true still makes her at fault! Isn’t she supposed to guard the child? And, frankly, I don’t believe her. I mean, comrade judge, can one possibly live with a woman tells lies because her mind is too small to accept the new order?! I want a divorce!!”

The judge thanked him, told him to step down and called the defendant; his wife. She was red-eyed from crying and as she passed her husband he turned his head in disgust so as not to look at her.

“Comrade Judge.” She said trying to choke back her tears and occasionally dabbing her eyes. “I am innocent. I swear I am a loyal Party Member and a good wife but my husband will not let me explain. What happened was like this. A few days ago I had to go out shopping to buy some food. I have no baby sitter, so I waited for the baby to go to sleep, locked the door and ran to the market. Anyway, I when I came back home, it couldn’t have been more than fifteen minutes later, maybe twenty my door was open and the baby was gone!! Gone!!!” She wept uncontrollably for a few seconds, blew her nose with a small kerchief and continued.

“So I ran into the streets asking people, searching like a crazy woman asking everyone if they saw my son until about a half an hour later I see my parents and in-laws walking in the distance. So I ran to them yelling and crying and what do I see? They are carrying my baby! They just had taken him for a walk!! That’s what they said. I was so relieved and happy!! But when I got home I saw what had happened! He had blood on his diaper!! Oy!! How could my own parents have mutilated my baby!!! MY BABY!!” And she began wailing so loudly she had to be escorted from the witness stand.

The grandparents took the stand. The four of them stood before the Judge like wax figures of thousands of years ago. The men sported long white beards and wore worn-out, long black coats to their knees while the grandmothers had their hair covered with large kerchiefs tied under the chin. The judge asked if they had anything to say in their defense.

One of the grandmothers who spoke Russian better than the others stepped forward and said in a thick Jewish accent, “Your Honor”. The Judge cut her short and said authoritatively, “‘Your Honor’ is an out-dated title of the old regime. You are to call me ‘Comrade’.

“You Honorable Comrade” she said as a few snickers came from the crowd. “Although I don’t see what’s so bad about our einikel (Yiddish for grandson) having a ‘Bris’ (circumcision) like everyone but I want you to know that we didn’t mean to do it…..

There was a second of total silence and then like an explosion, the crowd burst into howling laughter repeating the words ‘Just happened!’ Haa Haaaa! Just happened!! Hooo!!’. Even the Judge had to turn his face to a side until he could regain enough seriousness to pound his gavel and call for silence.

The old lady was obviously lying and when things returned to normal he leaned forward, narrowed his eyes and asked her sarcastically. “Happened?! And how, Babichka, can such a thing as a circumcision just ‘happen’?”

“I tell you Your Comrade Honor-ship.” She continued as though talking to someone on the street. “We went to our daughter’s house to take the baby for a long walk for his health. My daughter doesn’t take him for enough fresh air. Anyway she wasn’t home but we have a key. So we took him, our little sweetie, and went for a long walk. Then suddenly from nowhere some man walks over to us that we never saw before and asks if we want our einikel to be a Jew. We answered, what’s the question? So he takes out a knife, makes a brocha (blessing) and that’s it! Circumcised!!”

The crowd was already on the edge of pandemonium and this was it! The laughter was like thunder and it just got louder and louder. The judge pounded on the table, screamed for silence, stood up and stamped with his feet but nothing helped. People were in tears, holding their stomachs and a few actually fell into the isles! Totally out of control.

The Judge motioned to the Yevsektsia thugs and when they turned to the crowd and gave a few menacing glares the crowd became silent.

“But you should know, Comrade Honorable Judge,” The old woman continued as though there had been no disturbance. “We are happy.”

“Happy?! Who is happy? “Exclaimed the Judge in exasperation. “And about what!?”

“Ahh, we are all happy that our dear Einikel is one hundred percent Jewish….. just like you Your Honor! Aren’t you proud and happy you are circumcised?”

That was it! The crowd went wild! Whistling and hooting! Even the Yevsektsia toughs couldn’t control the waves of sheer glee. The Judge didn’t even try. He had no choice but to wait for the noise to subside, tell the grandparents to be seated, call the husband back and try to bring this fiasco to an end.

“Tell me, dear Comrade. I see from your record that you are a good, loyal hero of Communism and hold a very responsible position. Is there any other reason, that is, do you have any other reason for divorcing your wife?”

“No, Comrade Judge, none whatsoever; she cooks my meals, cleans my shirts and is a good wife. Except for this!”

“Well” The Judge continued “If I tell you that she is not guilty and has no part in this terrible act would you consider returning to her and dropping the charges?”

“Yes, of course Comrade Judge, if that is the decision of the court.”

“If so, the decision of this court is that your wife is innocent of all the charges. It is totally the fault of your superstitious parents and in-laws for allowing this act to be perpetrated. They will be fined 50 rubles and you may return to your wife. Case dismissed!!

No one in that room including the Judge (except for a few religious friends of the family) had any idea that it was all a staged trick! The couple wanted to have their son circumcised and still retain their government positions and this was the only way they could do it.

The name of the ‘Mystery Mohel’ that circumcised the child from nowhere was Rabbi Chonya Shagalov; was one of the thousands of Chabad Chassidim of the time that risked their lives daily just to do a favor for someone else and whose offspring are Chabad Chassidim throughout the world still risking everything to help others.