Home » Insights » A Cry for Revelation

A Cry for Revelation 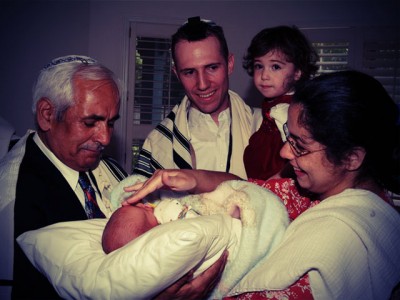 When the Rebbe Rashab-the fifth Chabad Rebbe was four or five years old, he was taken to his grandfather, the Tzemach Tzedek, for a birthday blessing. When he entered his grandfather’s room, he began to cry.

After calming him, his grandfather enquired about the reason for his tears. The child responded, “In Cheder-Hebrew School, we learned that God revealed Himself to Avraham our forefather. Why does He not reveal Himself to me?”

The Tzemach Tzedek answered him, “When a Jew (according to an alternate version, ‘a tzaddik’) who is ninety-nine years old recognizes that he must undergo [the spiritual service of] circumcision, he is worthy for God to reveal Himself to him.”

This story emphasizes that man must earn the revelation of Godliness through his service. When, a tzaddik has carried out his service for ninety-nine years and realizes that he must still circumcise himself, then, he is worthy of God’s revelation.

(Both these concepts are alluded in the verse which relates that Avraham “was sitting in the heat of the day.” The “heat” refers to an intense revelation of Godliness as reflected in the verse “Like the sun and its shield are Havayah and Elokim (two names of God).” Avraham’s “sitting,” implies that the revelation was received and internalized in “a settled manner.”)

These two dimensions of the mitzvah of circumcision are interrelated. It is through drawing the influence into the lowest levels of material existence that the ultimately transcendent spiritual nature of its source is revealed. To explain: The ultimate purpose for the creation of this world is that God desired to have a dwelling in the lower worlds.

It is at the time of circumcision, that the soul of holiness, the Godly soul which is “truly a part of God,” a reflection of His essence, enclothes itself in one’s body. Thus, for each person, the circumcision represents the time when “God revealed Himself to him.” Furthermore, this revelation permeates his physical body.

The connection between the revelation of God and the entry of the soul in the body at the time of circumcision is reflected even in a child’s life. Firstly, a child has a direct appreciation of Godliness, to quote Torah Or: “[The essence of God’s] light is in revelation. Therefore, even infants know that G-d exists.” Furthermore, children have a unique manner of relating to God and thus we find a great sage saying, “I pray with the intention of a child.”

Moreover, children understand that the awareness of God has to be connected with physical entities. Thus they understand of the importance of reciting blessings, thanking God for the food that they eat. Similarly, we see that children have a unique attraction to a mezuzah, and kiss it eagerly several times a day. Also, through having a tzedakah pushkah and holy Jewish texts in their rooms, they transform their room — and the entire house — to a “sanctuary in microcosm.”

And from the mezuzah, one proceeds from one’s house to the world at large as the great Maimonides writes, “Whenever one enters or departs, one will confront the unity of God’s Name.” This will inspire a person to enhance his service of “Making this place Eretz Yisrael,” i.e., transforming the world into a dwelling for Him.

Based on the above, we can understand why the Rebbe Rashab cried for the revelation of Godliness. In essence, that revelation is already present. What is lacking — and therefore, necessary — is merely that a person appreciate and become aware of that revelation.

To explain: Through circumcision, the Godly soul has established a connection with the person’s body, allowing him to appreciate Godliness within the context of his material environment. What was unique about Avraham was that he actually saw Godliness in an open and manifest way. This is what the Rebbe Rashab desired, not only to have the essential connection with Godliness established by the soul through circumcision, but rather that God should reveal Himself to him, openly and manifestly, as He did to Avraham.

The Tzemach Tzedek answered that for a person to receive a direct revelation of Godliness, he must merit it through his actual deeds. When a person serves God for ninety-nine years, and then realizes that he requires to undergo circumcision, he is worthy of a manifest revelation.

This produces a lesson for every individual, when he reads that God revealed Himself “to him,” he must realize that “to him” does not mean only to Avraham, but “to him,” to his own self. Since he is a descendant of Avraham and has entered into “the covenant of Avraham” through circumcision, God reveals Himself to him. This should arouse in him a desire to actually see that revelation. And indeed, as can be derived from the story concerning the Rebbe Rashab, even a young child can desire such a revelation. Moreover, that desire can be so powerful that it motivates him to cry.

Similarly, this desire should be powerful enough to motivate every individual to carry out his service in causing Godliness to permeate every aspect of his being and all dimensions of his portion in the world at large. In this manner, he will make himself a vessel worthy of Divine revelation and indeed, cause that revelation to permeate the entire world, making the world a dwelling for Him.