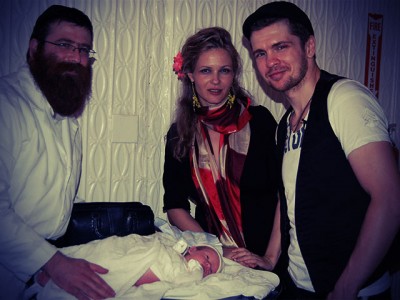 This appears to lead to the conclusion that when a child is circumcised after eight days — even when it was impossible to circumcise him earlier, e.g., the child was sick — the circumcision is not considered to have been performed “at the appropriate time.”

Moreover, it would appear that the mitzvah of circumcision performed after the eighth day affects only the coming days; it has no retroactive effect on the preceding days when the child was uncircumcised. Seemingly, there is nothing that can be done to amend the past.

The person is not considered to have transgressed God’s commandment. On the contrary, he is forbidden to circumcise the child while ill, for pikuach nefesh, a threat to life, supersedes all of the Torah’s commands. Nevertheless, the actual performance of the mitzvah is lacking. As the Maimonides explains, we are permitted to circumcise a child only when he is healthy, because: “A threat to life takes precedence over everything. It is possible to circumcise the child afterwards, but it is impossible to ever bring a Jewish soul back to life.”

Nevertheless, upon a deeper analysis, the above conclusion is unwarranted. This concept is reflected in a careful examination of the wording used by Maimonides, who alludes to two reasons for the delay of the mitzvah:

a)  “a threat to life takes precedence over everything,” and

b)  “it is possible to circumcise [the child] afterwards…,” i.e., the
mitzvah is not nullified.

The first reason given by Maimonides states the importance of pikuach nefesh. Even if there is no possibility of performing the mitzvah afterwards, the threat to Jewish life takes precedence. By adding the second reason, he implies that the mitzvah of circumcision which one fulfills afterwards also amends for the previous days and even enables one to attain the advantage of circumcision at the appropriate time.

If the mitzvah would affect only the coming days, the rationale “it is possible to circumcise [the child] afterwards…” would not be sufficient in its own right, for the initial days would not have been corrected, and the advantage of fulfilling the mitzvah at the appropriate time would be lacking.

This is somewhat difficult to comprehend: How can a mitzvah have a retroactive effect? There are several instances where the Torah states that an activity will have an effect on a previous time, but in these instances, the activity is not intended to affect a new status, but instead to clarify the nature of the previous situation; alternatively to cause an act that was fulfilled conditionally to become binding. Because the activity carried out afterwards merely clarifies the previous situation, it is understandable that the activity can have a retroactive effect.

Also, the order in Maimonides’s wording raises somewhat of a question: After stating “It is possible to circumcise [the child] afterwards,” Maimonides adds: “but it is impossible to ever bring a Jewish soul back [to life].”

The latter phrase seems to relate more to the first reason stated by Maimonides, the preeminence of pikuach nefesh. For once it is explained that through circumcision at a later date one can retroactively rectify the lack in the previous days, it is seemingly unnecessary to state: “It is impossible to ever bring a Jewish soul back [to life].”

The above questions can be clarified based on a passage in Likkutei Torah of Rabbi Schneur Zalman of Liadi, founder of Chabad Chassidism, which states that circumcision draws down a level of Divine light which the Jews cannot draw down through their Divine service. It transcends the levels that can be reached by the efforts of mortals, and instead is drawn down on God’s initiative. Nevertheless, the act of circumcision is necessary, because as long as the foreskin is present, the light will not be drawn down. It is only when the foreskin is removed that the light will reveal itself.

Similar concepts apply with regard to the concept that the entry of the holy soul into the body takes place through the mitzvah of circumcision. This refers to a level of soul which transcends our powers of understanding. There is no way we can tap this level of soul through our own efforts and Divine service. Instead, every Jew shares an inherent, essential bond to this level. Nevertheless, it is through circumcision that this inherent connection is revealed.

On this basis, we can understand how circumcision effects the past. For it too, like the situations mentioned previously, is not bringing about a new development. It is revealing a factor which existed previously.

To cite another example: Teshuvah (repentance) which is motivated by love has a retroactive effect, transforming one’s sins into merits. For teshuvah does not bring about a new situation. Even at the time a person commits a sin, his soul remains faithful to God, but its connection with Him is hidden. Since teshuvah brings this inner bond to the surface, it has a retroactive effect, elevating one’s previous conduct. Similarly, with regard to circumcision, if one does not perform the circumcision afterwards, the Jew’s inherent connection to God remains hidden.

This runs contrary to the intent for the creation as a whole, and the intent of the descent of that particular soul. For the purpose of the creation is that a Jew should — by virtue of his own Divine service — reveal the Godly nature of his soul. When, however, a Jew who was not circumcised at the appropriate time circumcises himself afterwards, he reveals this inherent, timeless connection. Therefore, this also has a retroactive effect on the previous days.

On this basis, we can understand why after mentioning the two reasons spoken of previously, Maimonides adds: “It is impossible to ever bring a Jewish soul back [to life].” In addition to the obvious meaning of this phrase, it also explains why when a child is circumcised after the appropriate time, the circumcision has a retroactive effect.

The Jews’ connection with God transcends any and every factor. It continues at all times, regardless of the nature of the Jews’ conduct, as it is said: “Regardless, they are My children; to exchange them for another nation (Heaven forbid) is impossible.”

With the words “It is impossible to ever bring a Jewish soul back,” Maimonides is alluding to the fact that God can never retract His covenant with the Jewish people.

Moreover, this covenant does not merely involve the people as a whole; it effects every individual Jew. God has bound Himself with every individual Jew with a bond that cannot be retracted, for God loves every Jew with essential love. As the Baal Shem Tov, founder of Chassidism, would say: “Every Jew is cherished by God like an only child born to his parents in their old age; indeed, he is even dearer to Him.” The intent of the creation is: “for the sake of the Jews who are called ‘first.'”

And for that same reason, whoever saves one Jewish soul is considered as if he saved the entire world. For when a lack is experienced by one Jew, the entire world is effected.

Since “it is impossible to ever bring a Jewish soul back,” i.e., the bond between God and every Jew is always completely intact with the fullness of its power, all that is necessary is that it be revealed. For this reason, “it is possible to circumcise [the child] afterwards,” and there will be a retroactive effect, because circumcision is revealing the inherent connection to Godliness which exists at all times, even before the circumcision.

As mentioned previously, the mitzvah of circumcision alludes to general concepts involving our Divine service. Similarly, the concepts described above are reflected within our personal sphere. Every Jew must realize the immediate demands of his Divine service. Work must be accomplished. A person cannot lie down and rest, confident that he shares a latent connection with God. He may not remain content with the promise that ultimately “No one will ever be estranged from Him,” and that his conduct in the immediate present is of no significance.

For this inner connection must be brought into revelation, and this can be accomplished only through work.

This work involves the acts of milah,- cutting the thick foreskin, and priyah, opening the thin membrane, which on a spiritual plane refers to our service of subduing our material desires. Afterwards, one must perform metzitzah, drawing out the blood — removing the excitement from material things from one’s body as a whole.

On the other hand, a person must appreciate that his efforts to “circumcise the foreskin of [his] heart” have far greater effects than could possibly be brought about through his own labor.

These endeavors will lead to a revelation from above and the fulfillment of the promise: “And God your Lord will circumcise your heart,” which in a complete sense will be manifest at the time of the complete and ultimate Redemption to be led by Moshiach may it take place in the near future.

(Based on an essay by the Lubavitcher Rebbe)