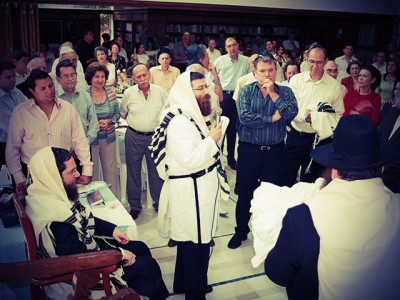 To explain the above:

a) Circumcision is the only mitzvah which leaves an actual physical imprint on our bodies (see Shabbos 130a). [Since, as stated above, circumcision can be understood as a paradigm for all the mitzvos. It follows that,] although it is not obvious, the same concept applies with regard to the other mitzvos. [They also affect our actual physical persons], as indicated by the verse: [1] “If not, with a strong hand… I will reign over you.”

b) Circumcision is “a covenant between Me and You,” [2] [i.e., it is performed for the sake of our relationship with G-d]. And yet, it also is of physical benefit, but this physical benefit is superseded entirely by the spiritual benefits [of the mitzvah].

The same is true with regard to the totality of the Torah and its mitzvos. They also provide material benefits, and yet these are totally eclipsed by the spiritual benefits they bring.

c) [Another aspect of circumcision which relates to the totality of our Jewish practice is that it involves some pain for the child;] the child cries. It is true that he is crying because of his lack of understanding – [he is crying, because he does not appreciate that it is worth undergoing the pain for the benefits of the mitzvah.] Moreover, he does not know that the intent is only to release “the blood of the covenant,” [a small amount of blood], not more. When he grows older, he understands these matters.

[The same applies to] the difficulty and the loss which is involved with [performing any] mitzvah. When one cries, it is only because one does not understand. For the intent is merely to release “the blood of the covenant.” With this, a person fulfills his obligation.

This [- the release “the blood of the covenant” -] is required even when a child is born as if he was circumcised. [3] For even a perfect Tzaddik must manifest Mesirus Nefesh, self-sacrifice. [For this reason,] the generation who entered Eretz Yisrael were commanded to recite the Shema, because – as explained in Tanya, ch. 25 – [ “the observance of the Torah and its Mitzvos are dependent on the constant remembrance of Mesirus Nefesh”].

[The release of “the blood of the covenant” is equivalent to Mesirus Nefesh, for as our Sages commented: [4] “Of what difference does it make if one is killed entirely, or partially.”

[The pain caused by circumcision is minor, and there is no real danger. On the contrary,] if [circumcision] can [possibly] harm the child, e.g., a sick infant, the Torah forbids the circumcision until the child regains its health. This indicates that when the Torah does command the circumcision, this is certainly for the child’s benefit in a physical way as well. The same is true with regard to all the other mitzvos, although at times, one does not understand.

Just as circumcision must be performed with happiness and with Mesirus Nefesh, so too, these qualities must permeate the totality of our observance of the Torah and its Mitzvos.

If one carries out all of the above as required, the child – the spark of holiness – becomes a viable birth, and he proceeds to the redemption of the firstborn. [Herein, there is an allusion to the concept of redemption in general, as it is written: [5] ] “Zion will be redeemed with judgment.” For from the circumcision performed by the individual, we come to the ultimate redemption – both of the individual, and of our people as a whole. [At that time, we will merit fulfillment of the prophecy:] [6] “And G-d, your Lord, will circumcise the foreskins of your hearts,” as explained in Tanya, Iggeres haKodesh, epistle 4.

[1] Ezekiel 20:33 [The Rebbe does not explain his intent in citing
the prooftext. It would appear that the citation indicates
that the mitzvos convey G-d’s influence which, with or without
our knowledge or consent (note the context of the passage
in Ezekiel), sways our conduct.]

[3] I.e., from birth, his organ is not covered by a foreskin. See Shabbos 135a which describes such a circumstance.