STORY: A Bris In Stalinist Russia 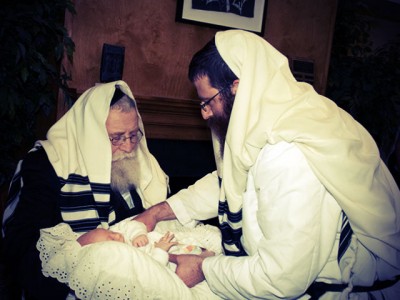 It was Stalinist Russia. The sudden banging on the door made the occupants blood run cold. The knocking was getting louder. They were about to sneak out the back exit when the older of the two suggested that the younger one stay behind. It was better to wait a few minutes before opening the door.

The banging continued even more vigorously. “Who’s there?” the youngster called out, but the stranger refused to identify himself. The youth flung open the door. Standing there was a high-ranking officer of the KGB.

“Is this where the shochet lives?” the officer demanded.

“Shochet?” he replied. “There’s no one here by the name of Shochet.” The officer gave him a penetrating look and said, “Then perhaps there’s someone here who cuts children?”

“No,” he said in the most confident tone he could muster.

For a moment the stranger said nothing. Then he whispered in the boy’s ear: “Don’t deny it. I know that the man who cuts children lives here!” The youth was shocked, for the man had uttered these words in Yiddish!

“I am a Jew. Seven days ago my wife gave birth to a baby boy, and I want very much for him to be entered into the covenant of Abraham. My wife is very much opposed to the idea. Tomorrow at exactly nine in the morning she will be leaving the house. 1 am begging you to come to my house tomorrow and bring the Mohel. The baby will be in one of the front rooms.”

The officer told the astounded youngster his address and hurried away. “Remember,” he said pleadingly, “Tomorrow is the eighth day of my son’s life. I implore you to do me this favor.”

Reb Eizik was the only shochet and Mohel in the entire city, and Yaakov, a boy with no living relatives in the world, had been taken in to live with the shochet and accompanied him on his holy and very dangerous rounds.

The officer left. Was it a trap? Yaakov was convinced that it was a clever ruse cooked up to catch Reb Eizik red-handed. When Reb Eizik came home, Yaakov filled him in on everything. The Chassid thought for several minutes, the deep wrinkles that lined his forehead testifying to his inner conflict and turmoil. He had reached a decision: “Tomorrow morning we will go to the officer’s house to enter his son into the covenant of Abraham.”

The following day, Reb Eizik and his ward arose at dawn and recited their prayers. Then they set out in the direction of the river. On the way, the Chassid explained that he was almost certain that this was, indeed, a trap. He therefore wished to immerse himself in a mikvah before they continued. “If this is to be our last day on earth, at least we will die in a state of ritual purity,” he declared.

The officer’s house was located on one of the finest streets in the city, which only served to confirm their suspicions. The neighborhood was inhabited by the highest ranking members of the KGB and their families.

But the two Jews stuck to their decision. Reb Eizik and Yaakov secreted themselves in a hiding place across from the officer’s house. Seconds later they saw a woman dressed in the latest fashion exit the building and proceed down the block. Together they strode across the street.

Reb Eizik knocked on the massive door. An older woman opened the door and motioned for them to enter. In the corner of the room was a beautiful crib, inside which a tiny baby was sleeping peacefully. They ran over and picked up the child, whereupon a small white envelope fell out.

Inside the envelope was a letter from the baby’s father, apologizing for his not being able to be present at his son’s Bris and asking that they give the baby a Jewish name. The rest of the letter was an emotional statement of his thanks and appreciation for the great mitzvah they were doing, without their even knowing who he was.

Reb Eizik quickly and deftly performed the bris, while Yaakov acted as Sandek. They were about to leave when the woman who had opened the door suddenly appeared and motioned for them to stay put. Yaakov was terrified. Seconds later, however, the woman brought out a brand new frying pan, and handed them a dozen eggs! A veritable fortune! She invited them to make themselves omelets. The young boy was so malnourished, so starved, that the eggs went down with no effort at all.

After they finished eating and were about to leave, the woman presented them with a huge sack of bread, another gift from the Russian officer. Such a quantity of bread was something the average citizen could only dream of, but how could they walk down the street carrying the bag. Surely they would attract the attention of the ever-watchful police. The woman suddenly understood why the two Jews hesitated to accept the priceless gift. She opened a drawer, ripped off a wad of coupons from a booklet and handed them over.

Many months later Yaakov was walking down the street when the same Russian officer stopped him. “I must thank you again, from the bottom of my heart. I have one more request to make of you. Whenever you make a Bris, you should tell my story. Let everyone know that even in Soviet Russia, there are still Jews who have a warm spot in their hearts for Judaism.”

This request led to a tradition in Yaakov’s family. He is honored with being the Sandek, in commemoration of the role he played in that Bris so very long ago, and he relates the story of the Russian officer, from beginning to end, with great enthusiasm and fervor.