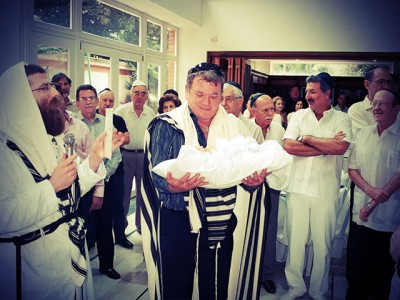 It is customary to have lit candles in the room where the Bris is performed. Some have the custom to kindle thirteen candles, connoting the thirteen Divine attributes of mercy.

The father places the child on the lap of the Sandek (if he is not the Sandek himself). The Mohel then recites certain prefatory prayers and proceeds with the Bris.

There are three important stages to the Bris process:

Chituch – The removing of the foreskin.

Priah – Uncovering the flesh under the foreskin.

Metzizah – Drawing the blood out of the wound and surrounding areas.

Following the Bris procedure the Mohel applies some medical ointments to
promote healing.

Once the Bris is completed and the child has been returned to his mother, the family and guests join for a festive meal.

It is customary that this meal includes bread and festive foods such as meat and wine. We also light candles to create a joyful and dignified atmosphere. It is customary amongst Chassidim that during the feast the father of the child recites a Chassidic discourse on the subject of Bris Milah. During the Grace After Meals, special portions are added.