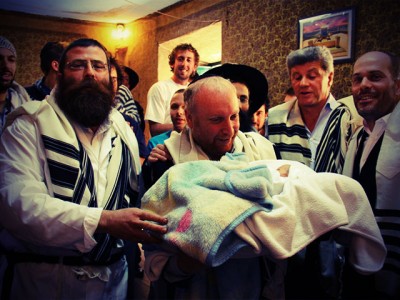 Thus, a Bris is performed on the eighth day, since it is through the act of the Bris that one attains the level of ‘eight,’ surpassing all levels of nature, and embedding upon the body an ever-lasting bond that surpasses all levels of rationality and limitations of nature.

One can easily understand why Ishmael felt more cherished: at age 13 he was old enough to protest. That he did not do so was surely reason enough for him to feel superior. But why did Isaac reason that he was the more cherished of the two?

The overall theme of circumcision is, as the verse says: “This shall be My covenant in your flesh, an eternal covenant.” Circumcision effects an eternal bond between the individual and God. Concerning a covenant formed between two dear friends there is no ironclad guarantee that the covenant will truly be everlasting, for mortals are subject to change. When, however, it is God who makes the covenant – in this case, His covenant with the Jewish people through circumcision – then it is truly eternal.

The reason that circumcision is performed at the tender age of eight days – at a time when the infant has absolutely no say in the matter – may be understood accordingly. Whatever a person does on his own initiative requires preparation; adequate time must therefore be allowed. However, the covenant that is set in motion through circumcision is effected entirely by God. In other words, circumcision is not an act through which a person binds himself to God. When a Jew is circumcised God binds Himself to the person with an “eternal covenant.”

Thus, there is no reason to wait until the infant will come of age and consciously affirm and participate in this act, for in any event he does nothing at all – the entire covenant comes from God. He is therefore circumcised at the earliest age possible.

Thus, the merit of Isaac’s circumcision at eight days surpassed not only that of Ishmael, but also the circumcision of his father Abraham. For Abraham was commanded to circumcise himself after he had attained the highest degree of perfection possible for a created being to achieve on his own. Thus, Abraham’s circumcision lacked the indisputable indication that the covenant, which came as a result of the circumcision, came entirely from God.

Only with the circumcision of Isaac, at the age of eight days, was it clear for all to see that his was a covenant that had nothing whatsoever to do with his created being, but was entirely dependenton God. (Adapted from The Chassidic Dimension)

(See more on The Eighth Day)