STORY: A Bris in Roman Times 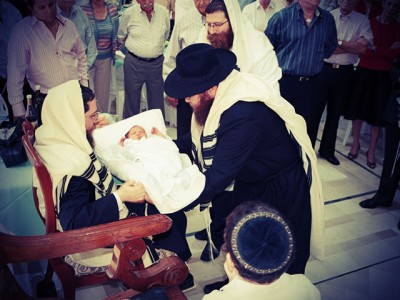 Many years ago, when the Roman Empire reached the Land of Israel, decrees against the Jews abounded. One such decree forbade the circumcision of Jewish boys. The punishment was severe for those who disobeyed. Rabbi Shimon ben Gamliel was the Nasi – the “prince” – at this time. He was known and respected by Jew and non-Jew alike, including the Emperor.

When his wife had a baby boy, their desire to obey God’s commandment was greater than their fear of punishment. In secret, they performed the circumcision.

Before long, the government found out and Rabbi Shimon was ordered to appear before the governor of his town. “What do you have to say for yourself?” asked the governor angrily.

“I have obeyed the King of Kings, Who has ordered us to circumcise our sons on the eighth day after birth,” answered Rabbi Shimon confidently.

“I am sending you, your wife, and the baby to the Imperial Court. For if other Jews see that you have circumcised your son and are not severely punished, then they will do the same,” roared the governor.

With renewed hope, they continued on to the palace. Upon their arrival they were shown into the emperor’s court who, upon hearing the charges, ordered the baby examined.

To everyone’s astonishment, there were no sign that a circumcision had been performed. “It’s a miracle,” whispered the people of the court. As soon as possible, the babies were re-exchanged, with no one the wiser.